I’ve been quiet for a little while because of a holiday and lack of internet but am delighted to announce that I have moved to a wonderful eco housing co-operative in mid Devon!

Beech Hill is a 17th-ish century manor house and has been occupied as a housing co-op since the early 80s. There are around 6 acres here comprising of wildish areas, a camping paddock circled by magnificent beeches, two poly-tunnels, two cob-walled gardens, an orchard… and a swimming pool. It’s also an hour’s drive from one of Britain’s best surf breaks. Yep, I know. Heaven! 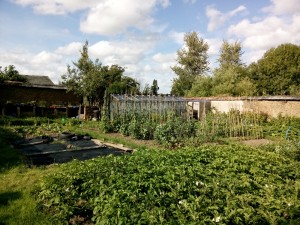 The community has solar, wood-fire and biomass-heated water and central heating, a wind turbine, grows much of its own vegetables – all organically, buys other food also organically from a workers’ co-op, recycles as much as it can, hosts a local composting scheme… I could go on. It’s a wonderful place to live and, because living here is cheaper than in Cardiff, I can spend more time working in the garden, developing my illustration style and also getting involved in some volunteer work. 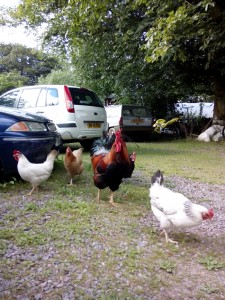 Of course there are chooks too

I’ve been working on some fascinating and really exciting projects in the meanwhile which I’ll start to share with you shortly. I’ll still be working with clients in Cardiff and all over the country, and intend to be back in South Wales every month or six weeks, so if you’re looking for an experienced and friendly graphic designer or illustrator wherever you are then do get in touch 🙂