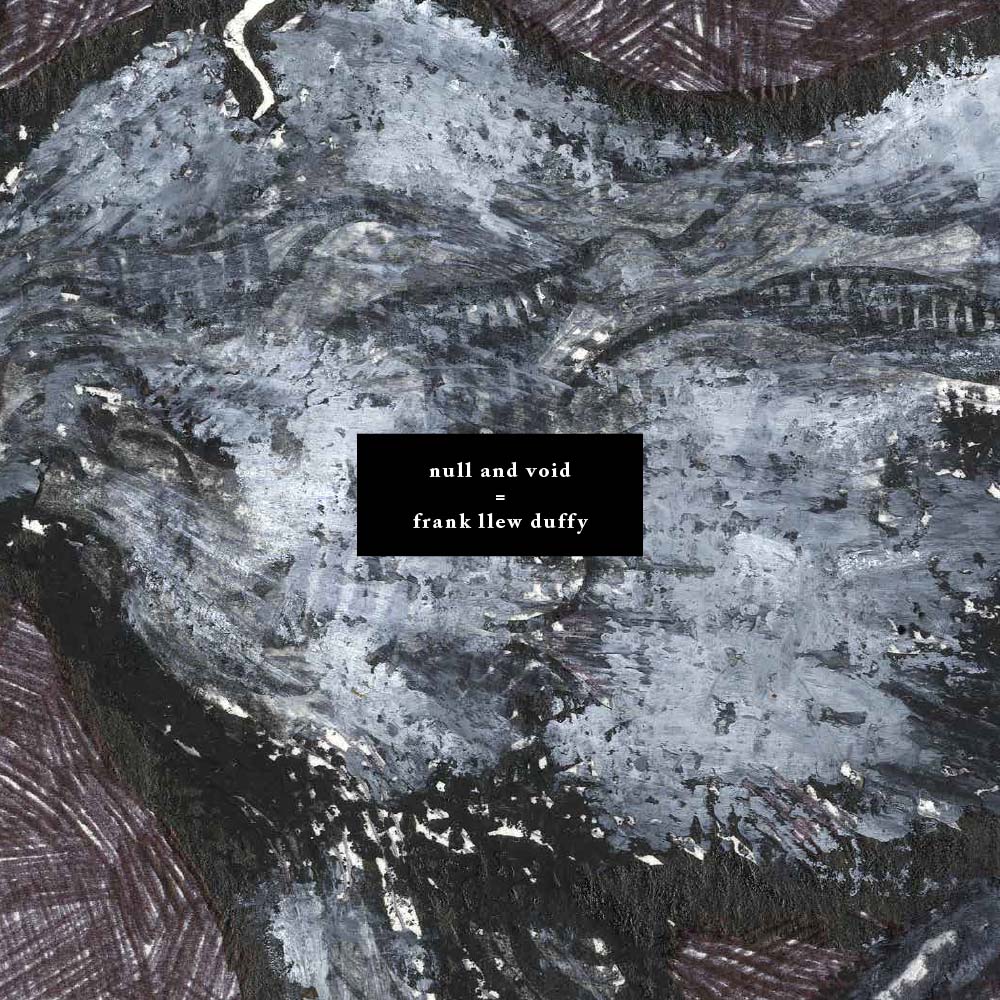 Some of you will know that I’m studying for a part-time Master’s degree in Illustration: Authorial Practice at Falmouth University. I can say, hand on heart, that the decision to do this is one of the best choices I’ve made. It’s pushed and shaped the ways I’ve thought about illustration and my own approach to it much further than I ever anticipated – and I’m only a quarter of the way in. 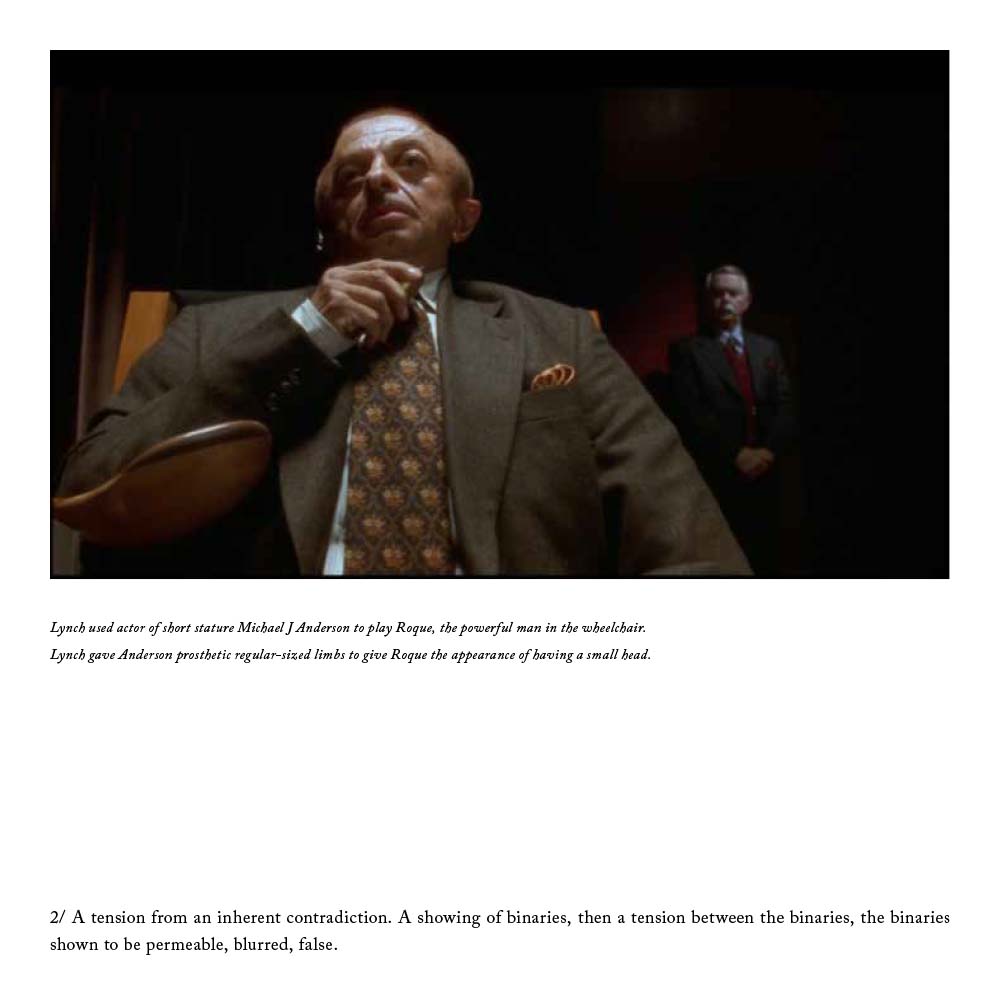 I handed in my first essay recently – the first I’ve written in 17 years. I was really proud of it – it is definitely the best thing I’ve ever written, but most importantly it was the first time in the whole of my academic career – from GCSEs, A-level, Art Foundation and BA Hons, that I’ve written an essay and learnt and developed from it, rather than it just being an exercise where I jump through a hoop and get a grade reward. 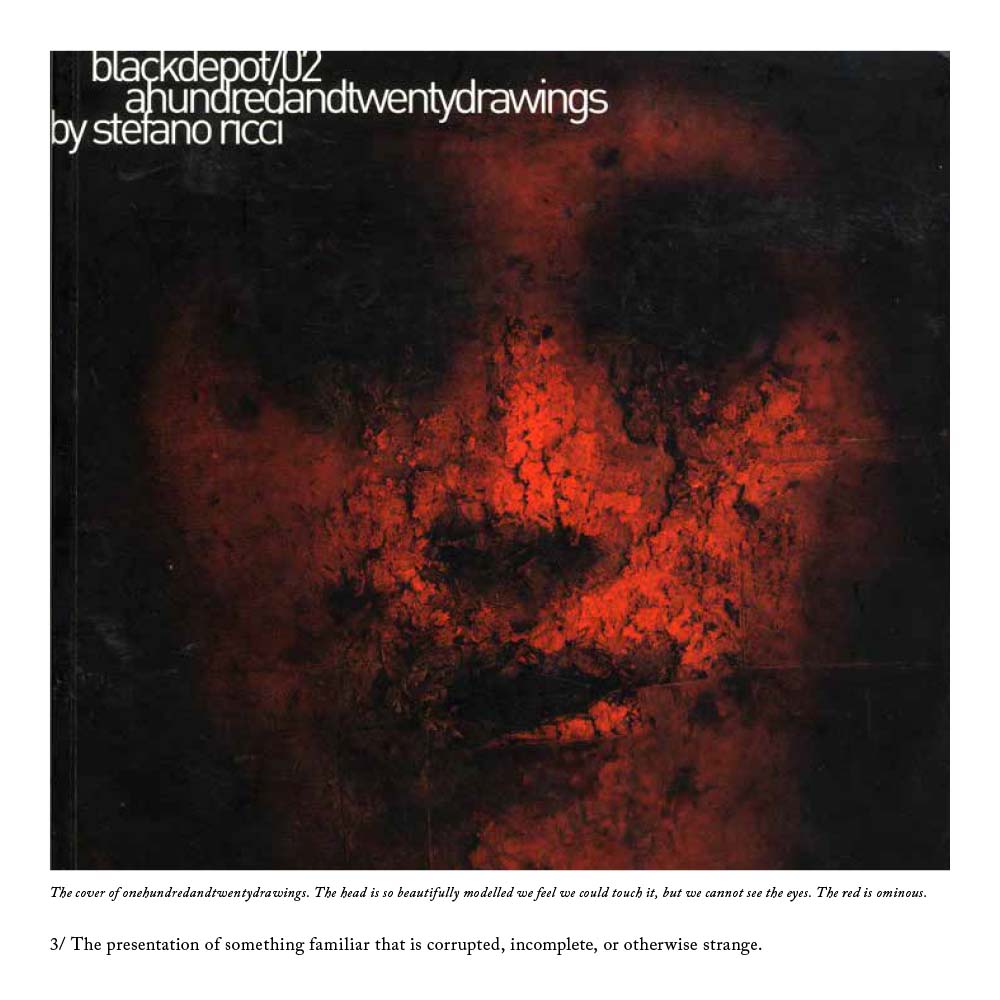 I wrote it about uncertainty in art, and took Twin Peaks director David Lynch’s Mulholland Drive and illustrator Stefano Ricci’s Depositonero as case studies. I looked at the use of uncertainty – something I’m fascinated with – through the lenses of queer theory, Jungian psychoanalysis and deconstructionism and showed how I was using it in my own practice. A percentage of the marks given were for the design and presentation of the essay – it was supposed to reflect the content. I printed it on tracing paper, cut it to loose-leaf squares and handed it in in a black hand-made cardboard box. I wish I’d taken some photos now! 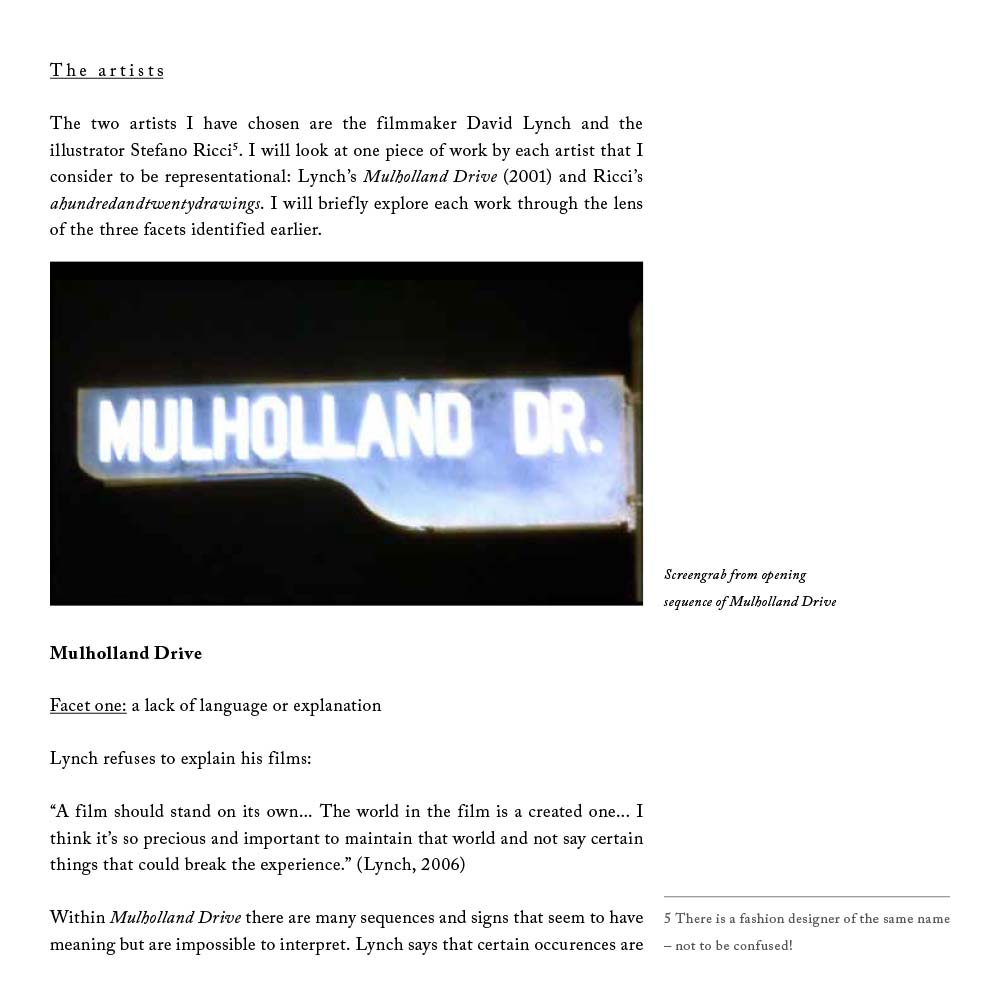 I just got my marks back. 50% is a pass, 60% is a merit and 70% is a distinction. I got 80% which is the best mark I’ve got for anything since my GCSEs. It’s amazing what you can do when you’re passionate about something! We were encouraged to be creative with the essay-writing process, so while the first two chapters were fairly standard in their academic writing style, the third was fully-referenced stream-of-consciousness, and the layout reflected this, the main body text flowing through the page and the footnotes bashing up against it: 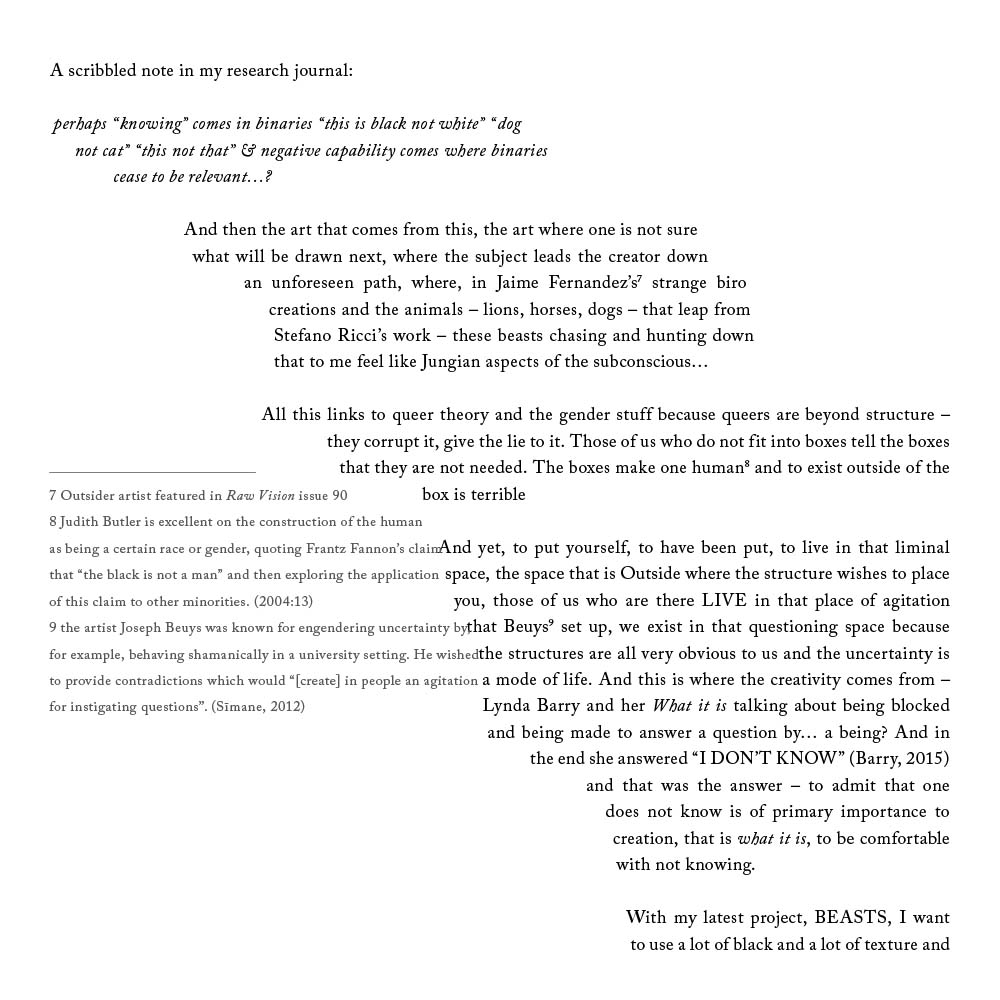 The word count was 3,000 which was torturous – I could have easily written 10,000 words. But it was a truly satisfying process and the discipline of editing is a vital one to develop.

If you’re interested in studying for an MA you can now get student loans to pay your tuition fees. I’m enjoying every moment of mine and I have noticed tangible improvements in the quality of my client work because of it. 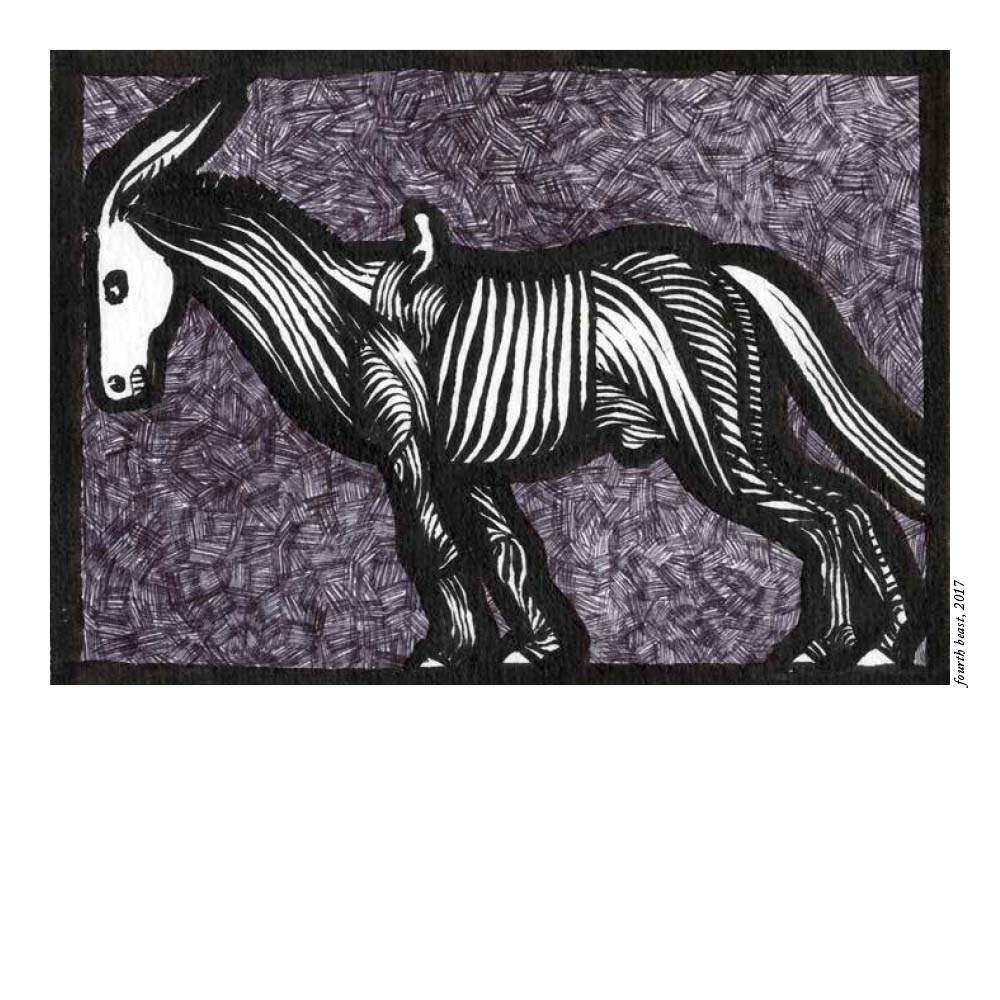 Nobody’s perfect and one of the things I am rubbish at is asking clients for feedback on the work I’ve done for them. I’ve only just got around to asking the amazing Sam Grady of The Cornish Vegan Pasty Company if she’d write me a testimonial for the logo design I did for her. Her response blew my mind so naturally I’m sharing it everywhere. So chuffed to have been asked to help out a fellow vegan business with their graphic design and even more chuffed that she should be so lovely about the process! She said:

“I feel extremely blessed to have found Frank! Frank took my rough idea, developed a handful of concepts (all of which would have actually been great) and worked with us to refine the logo, develop our product labels, and think about our brand. Ironically, when Frank first described one of the logo concepts I thought it would be my least favourite, but it’s now our logo! I love it and get so much positive feedback about it. Frank is extremely talented, the combination of graphic design & illustration means that Frank’s work can be corporate or creative or a combination.

“Choose Frank, trust Frank, and like me you’ll never need anyone else!”

Sam’s also bought one of my fox prints in support of the hunt ban and it’ll be on display at their new premises in St Agnes, which I’m over-the-moon about. 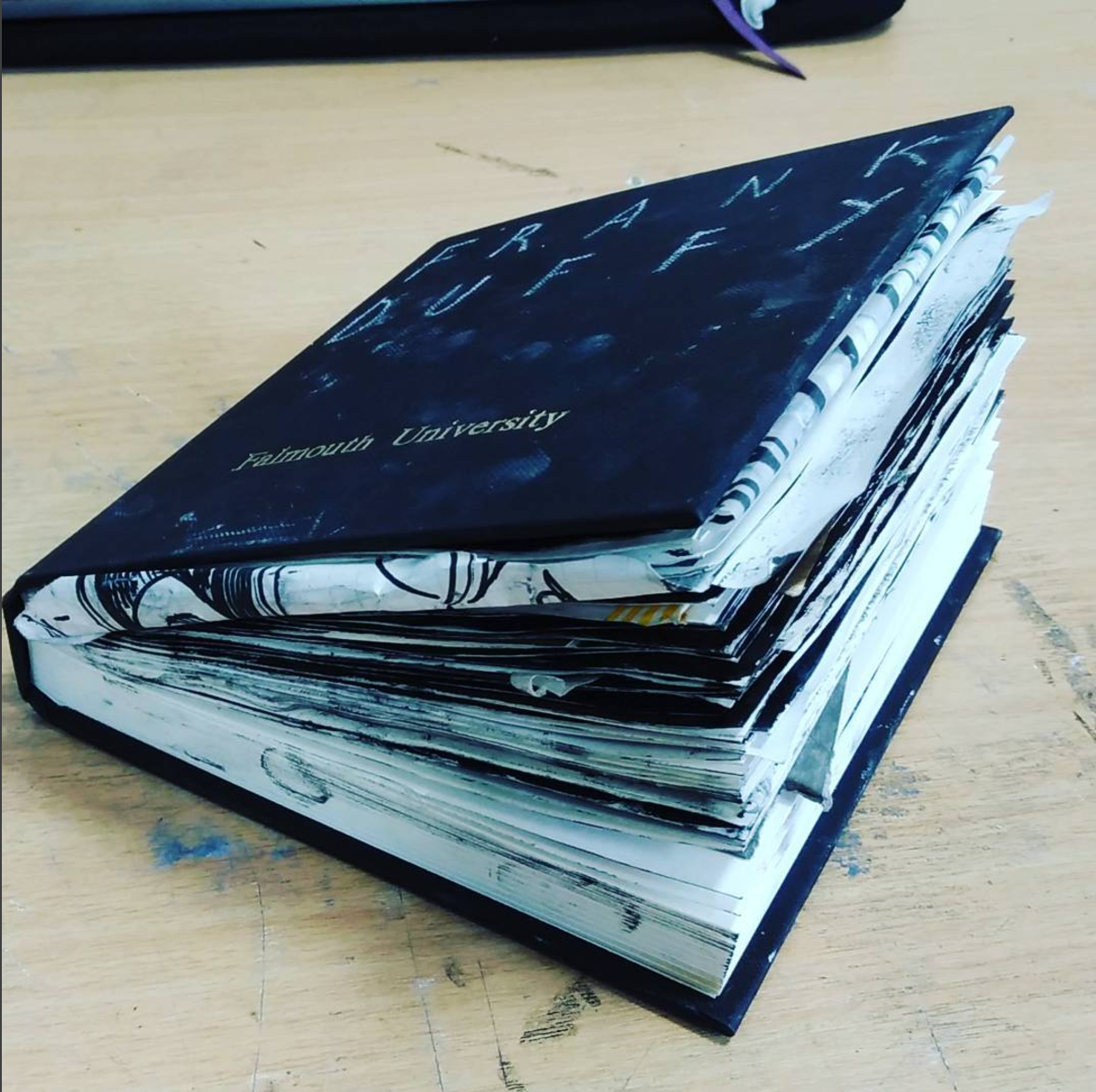 At the moment I’m putting regular callouts for people who produce works on paper – writers, poets, painters, drawers(?) to send me their rejected works.

This is what I’m doing with them: I’m sticking them, fairly randomly, into this little 14cm x 14cm sketchbook, and then I’m working over them in black and white (and blends of both), using oil pastel, brush pen, cheap student acrylic paint, and biro.

The works aren’t credited, but everyone who sends me work will get a big thanks if I ever put it on display.

There are strange beasts and skulls… 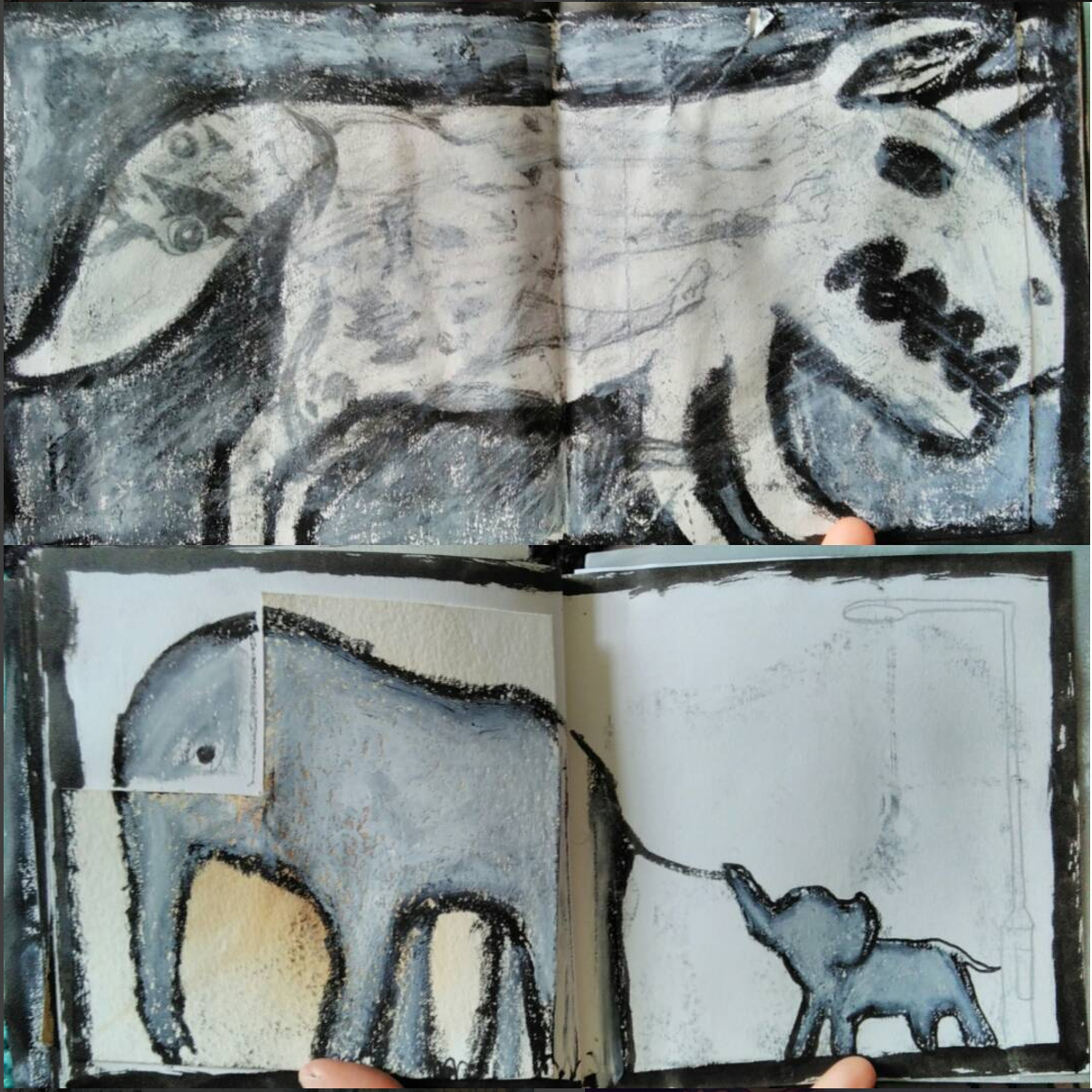 …and the occasional portrait 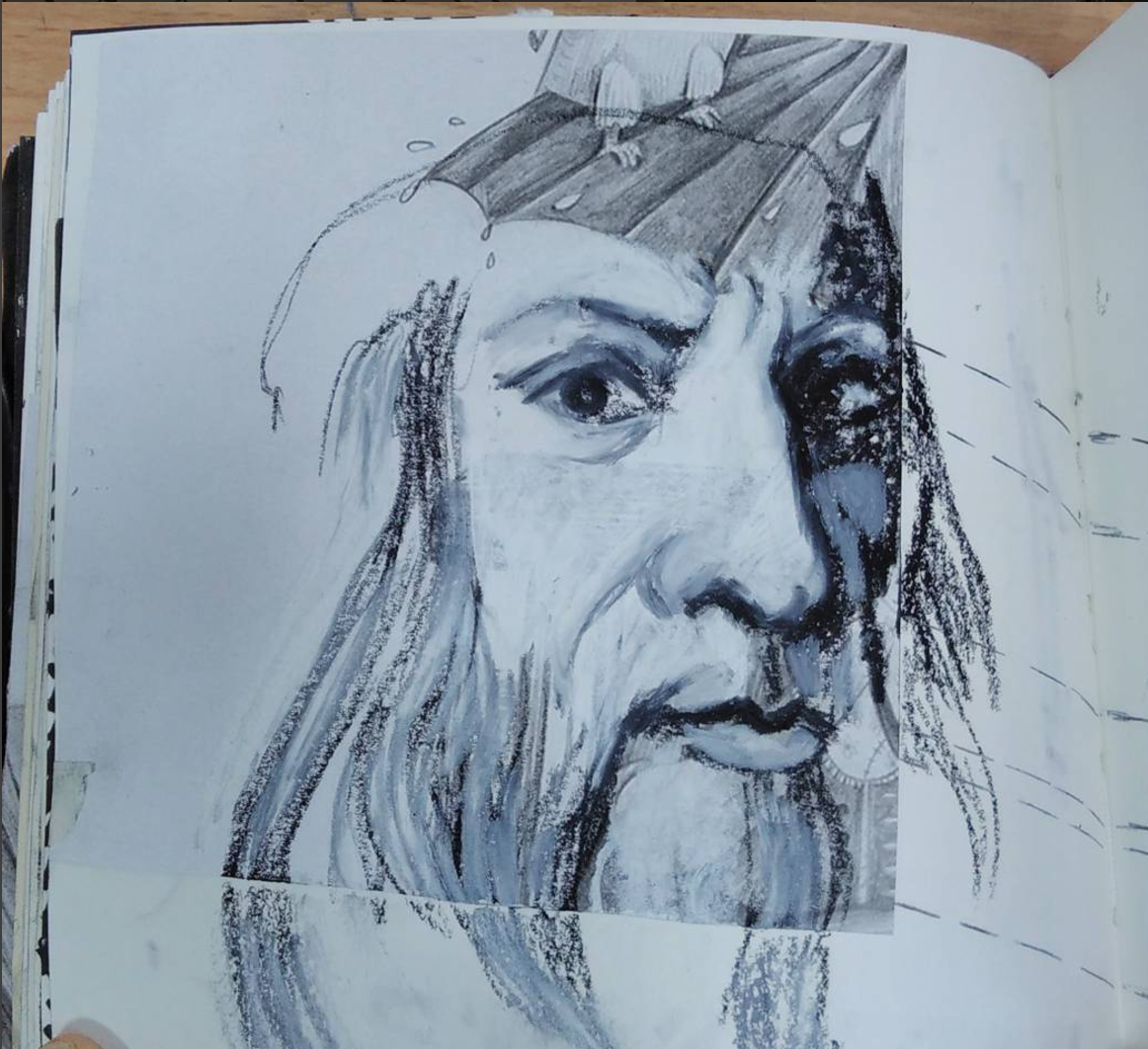 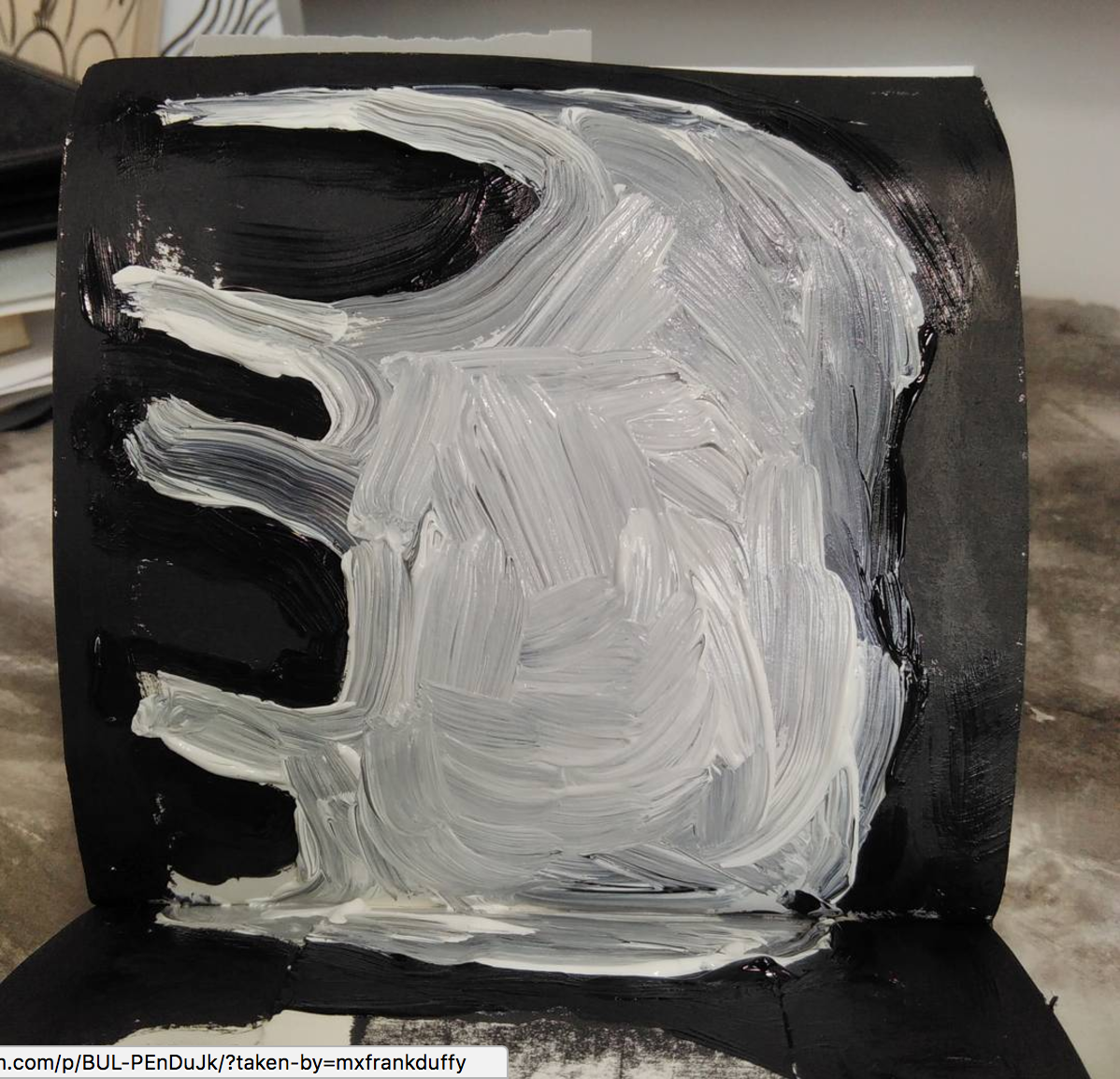 Today I worked out what the rules of the project are 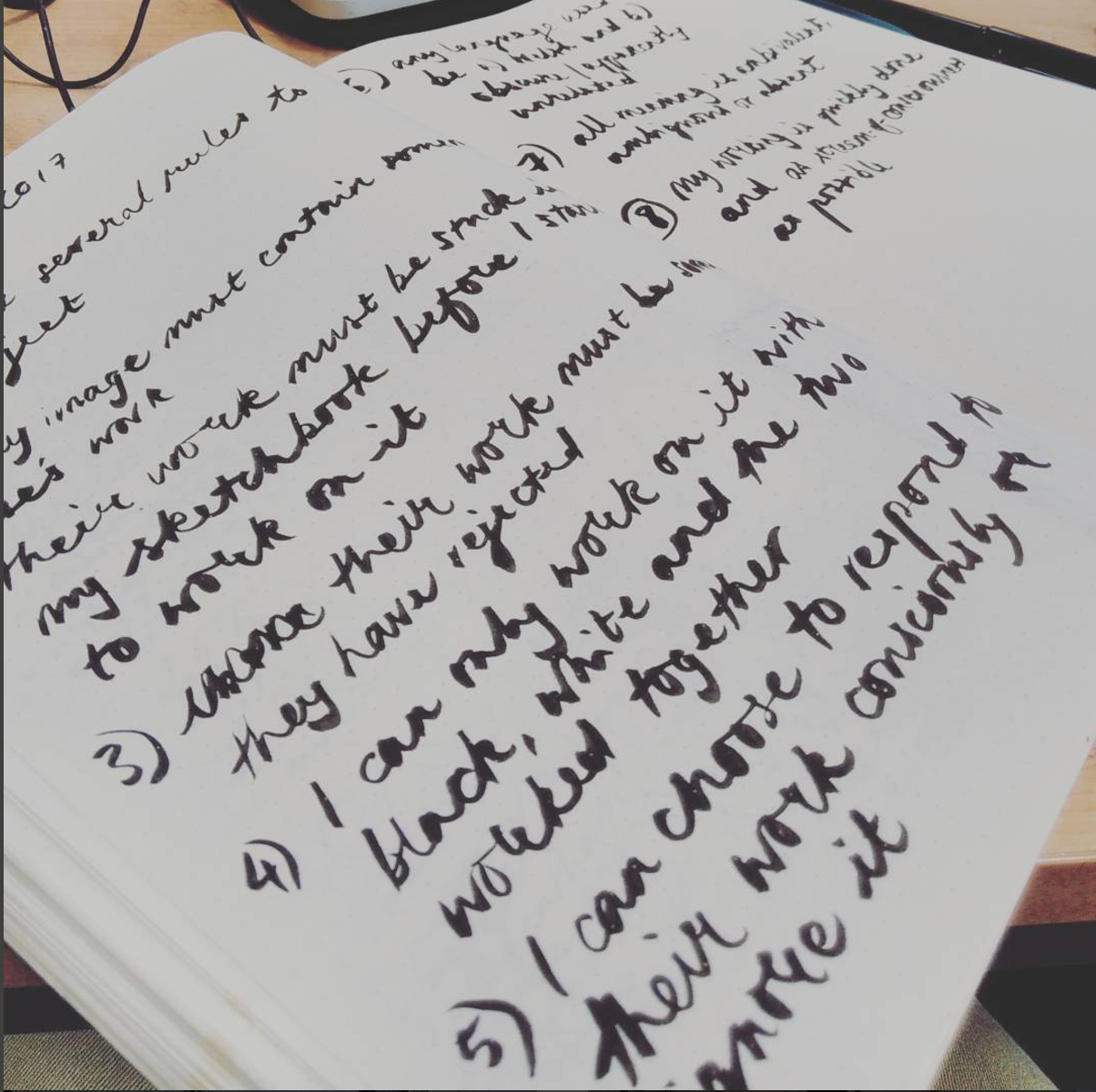 For the moment I am not explaining why I’m doing what I’m doing – I haven’t worked out quite how I want to talk about it, or whether I’ll do that at all. I’ll leave that to Our Lord And Saviour David Lynch: 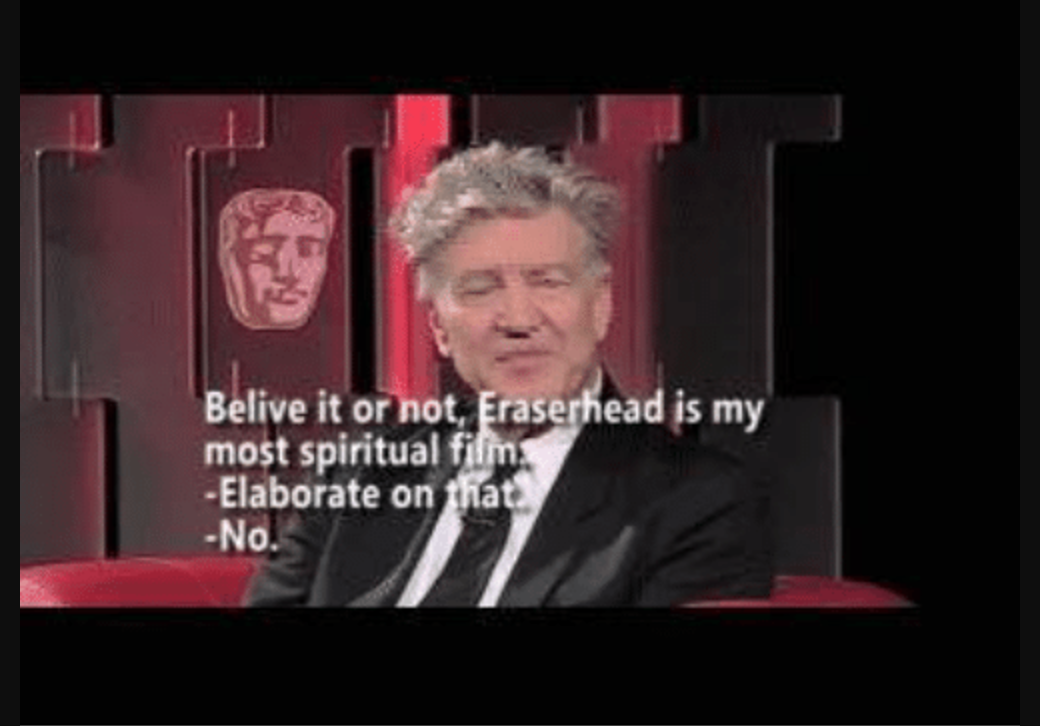 If you want to follow the project and see more of the images I create for it, you can follow me on instagram. If you’d like to send me some of your rejected work to incorporate into the project, post it to Frank Duffy, Beech Hill House, Morchard Bishop, Crediton Devon EX17 6RF. You can remain anonymous if you like! Here’s hoping you can help 🙂

I’m selling prints in support of the hunting ban

Hunting ban: all profits from the sale of my fox and hare prints will be donated to the League Against Cruel Sports 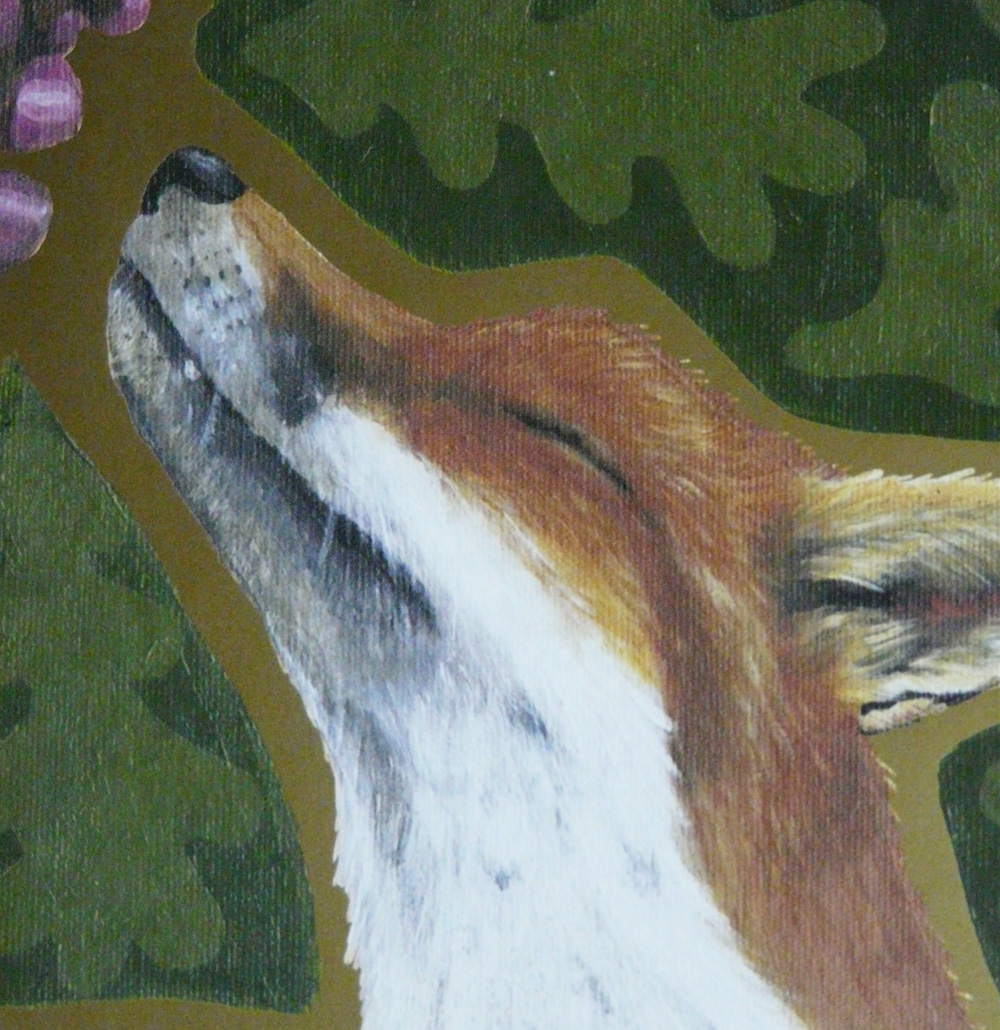 Those of you who know me will know that I cannot bear animal cruelty. Vegetarian from the age of eleven and vegan for five years now, and from a long line of animal lovers (my farmer great-grandfather wouldn’t allow the hunt on his land), hunting with dogs represents for me every pointlessly abhorrent exploitation we visit upon our fellow animals and our environment. Though it is so frequently flouted, the hunting ban was a great moral victory: a watershed moment where Britain decided that this kind of cruelty was unacceptable. 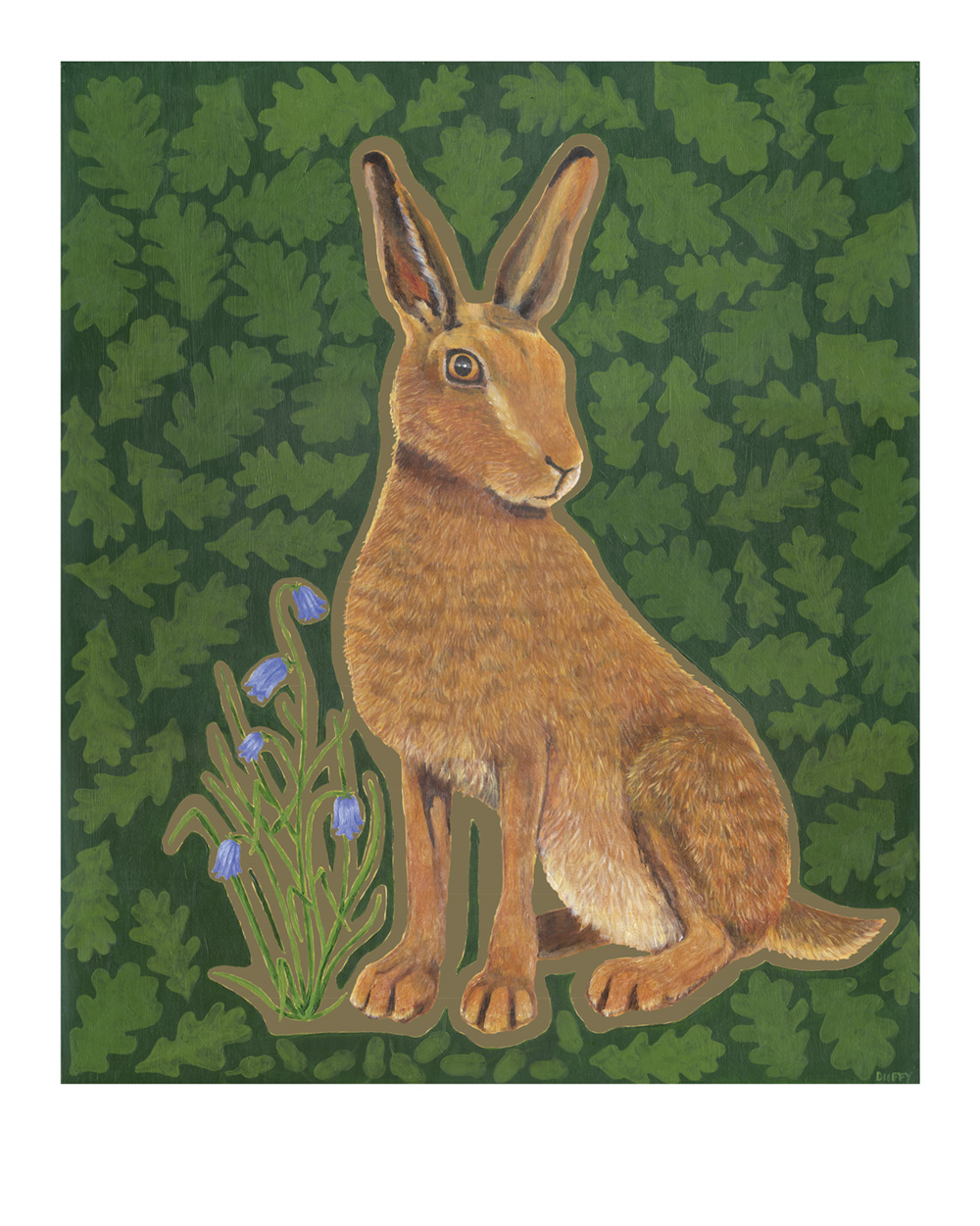 I loathe a lot of things about this tory government – its incompetent boneheadedness over Brexit, its treatment of people in poverty, disabled people, refugees, its stance on renewable energy and on, and on, and on.

But when Theresa May announced yesterday that, should she win the election, she will hold a free vote to reinstate the anachronism (one that continues to be inflicted on foxes and stags across the country illegally),  I thought, well, this is something I have the capacity to do something about.

I had these prints made a few years ago for a side project I was running that I needed to mothball, and I figured I would put them to good use. They’re printed in using the modern lithographic method (standard professional printing to the layperson) using a special gold ink. They’re from a couple of paintings that I created. They’re printed on 100% post-consumer-waste recycled paper with a silk finish and are richly detailed.

Every penny after cost of printing, packaging and posting will go to The League Against Cruel Sports whom I feel are best placed to win this battle of hearts and minds.

I would love to get this message spread far and wide so please do feel free to share. 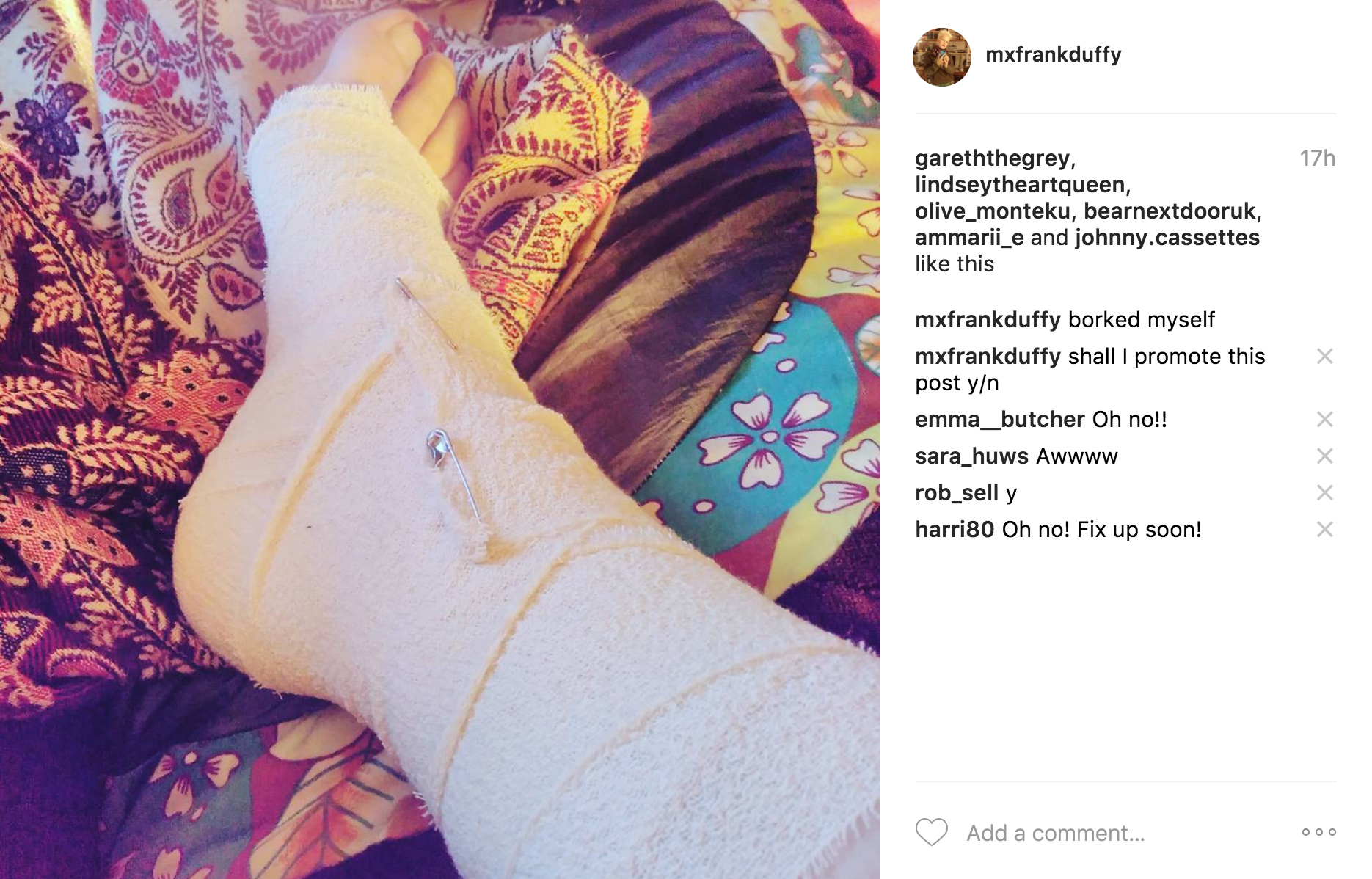 Here’s a quick post which should present a snapshot of what it is to live here.

Yesterday afternoon I was working in the paddock drawing a beech tree for an illustration. I heard the chickens making a lot of noise and so I leapt up and sprinted to their large pen to check for a fox. Our most elderly chicken was in the hen house, having just laid a rare egg, and was clucking loudly and indignantly at a rat she’d seen. I chased off the rat, let myself out of the pen and ambled slowly back to where I’d been sketching.

I wasn’t paying attention, I hit some uneven ground, my foot went over and there was a shock of pain and a crunching sound, a bit like the sound you make when you step into fresh snow. I did some loud and varied swearing. I could still walk on it – just – but I could tell it was going to get a lot worse really quickly,

I hobbled back to the house and immediately found some ice, some ruta ointment and a bandage. I sat on the bed and propped my foot up high.

My partner was staying at the time and brought me my share of the amazing communal dinner. He needed to get back to Bristol today and while he was loading our plates last night was offered a lift to the station by two different people (me not being able to drive him now).

This morning I had three people knock my door, one bringing more ruta ointment, another asking if I needed any shopping (why on earth I didn’t ask for a big bag of vegetable crisps and a pot of humous is beyond my ken), offering to water my plants in the greenhouse and polytunnels and another just now offering to make me tea and lunch. 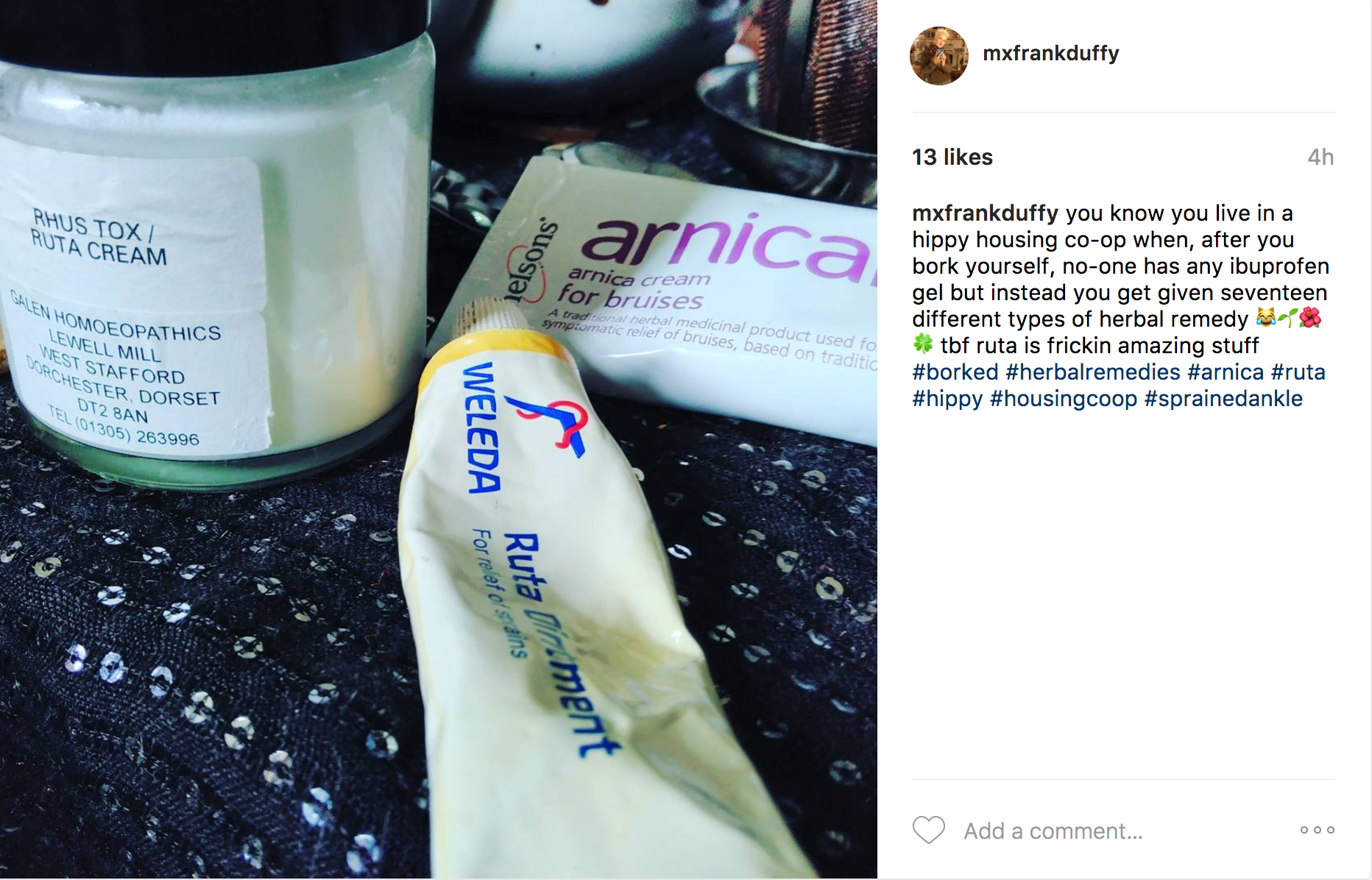 This evening someone will bring me my dinner and I’m sure there’ll be other people just checking to make sure I don’t need anything.

When I first moved in I got a very painful thing called trigger thumb & could hardly do anything at all. I felt awful – I’d just joined and I wasn’t able to contribute & everyone was looking after me. I got told I was being ridiculous (such is my wont) in a very loving way and was made to rest, and indeed was told off for trying to do stuff.

When another co-op member was ill with flu I was driving to the nearest town and asked her if she needed anything. She gave me £10 and told me to spend it on fruit in the green grocer and I took great delight in selecting pineapples and mangoes and lychees and all other of exotic loveliness for her. It felt really good.

So yep, that’s living in community.