I thought I’d share with y’all how I put together the surfing illustration for the Spring 2014 issue of CIO Connect magazine. I love learning about how other illustrators put things together and I’ve had a few people ask how I work, so…

Firstly, the idea for the article’s illustration came from the concept that a lot of IT leaders have too much data to be able to work with it – hence they ‘drown’ in it, but some smart ones find a way to make all this data work for them, so I guess they surf it, surfing being all about using the power of the water. Illustration ideas are just a form of metaphor creation for me! 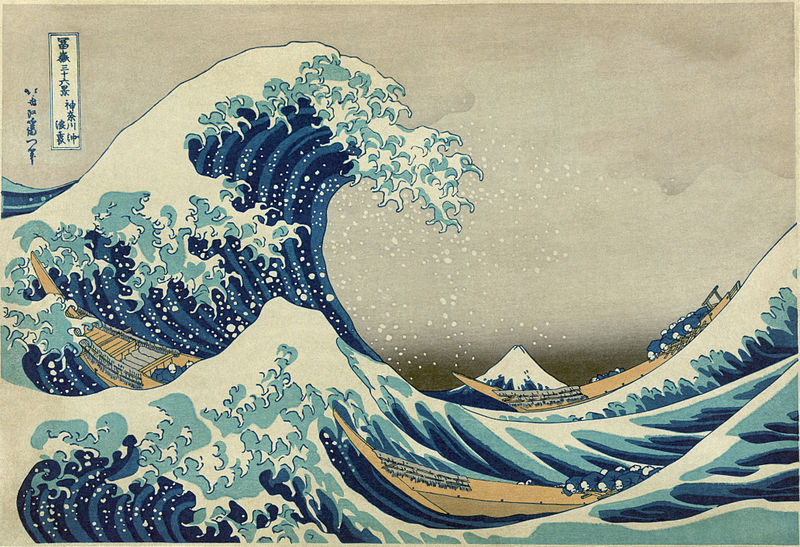 The Great Wave off Kanagawa by Hokusai; image from Wikimedia

The inspiration from the style came from two sources, one probably influenced by the other. The first was The Great Wave Off Kanagawa by Hokusai; the second is this Nike advertisement postcard found in a surf magazine a few years back and stuck on my office wall along with all of the other things I find that I like and may reference later. 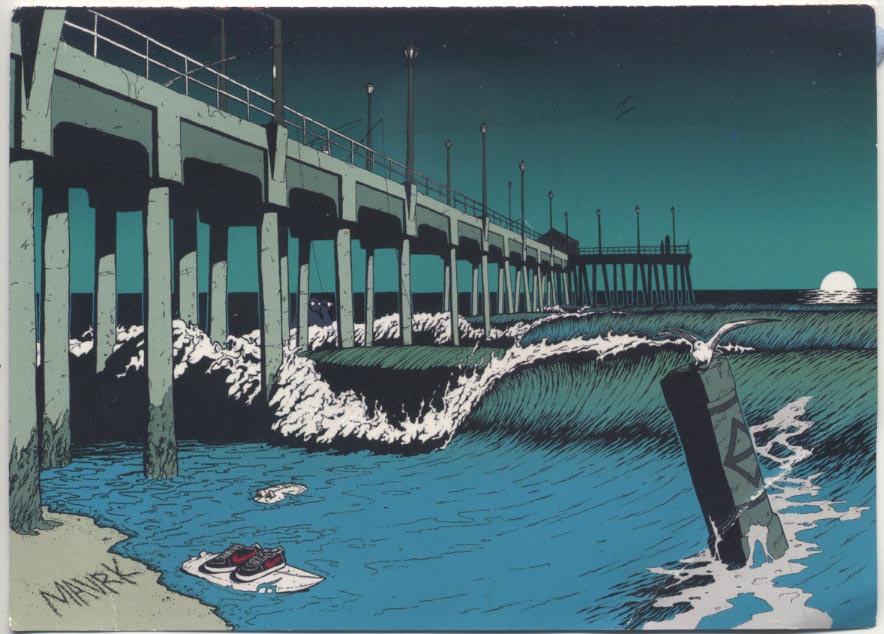 A postcard that fell out of a surfing mag way back when; I stuck it on my wall with all the other things I like. Pretty sure it references an early scene in Dog Town and the Z boys which is an excellent movie if you are into skating and surfing and such

I drew the whole scene in pencil from the inside of my head and memories of surfing, without reference to photos (sometimes I use photos to accurately capture a particular object, or person’s position, or something). 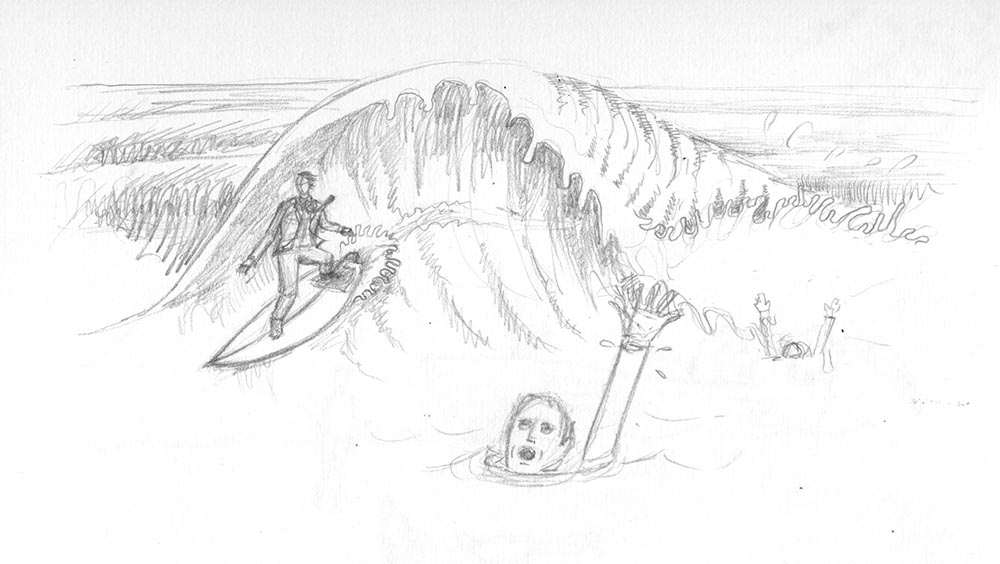 initial pencil rough of illustration. The purpose of this is just to show the editor what’s in my head and give them some idea about final composition

My editor Mark Samuels approved it with the one condition that I changed the gender of the surfer (yay!)- IT is a rather male-dominated industry and we try to rebalance that at the magazine as much as possible – and so I inked up the drawing using a brush and black Indian ink, paying close attention to the way Hokusai and the Nike advert had depicted the waves. Anything that is constantly moving, like fire and water, is very hard to draw, and so I make no apologies for nicking the way someone else has successfully managed to get it right! 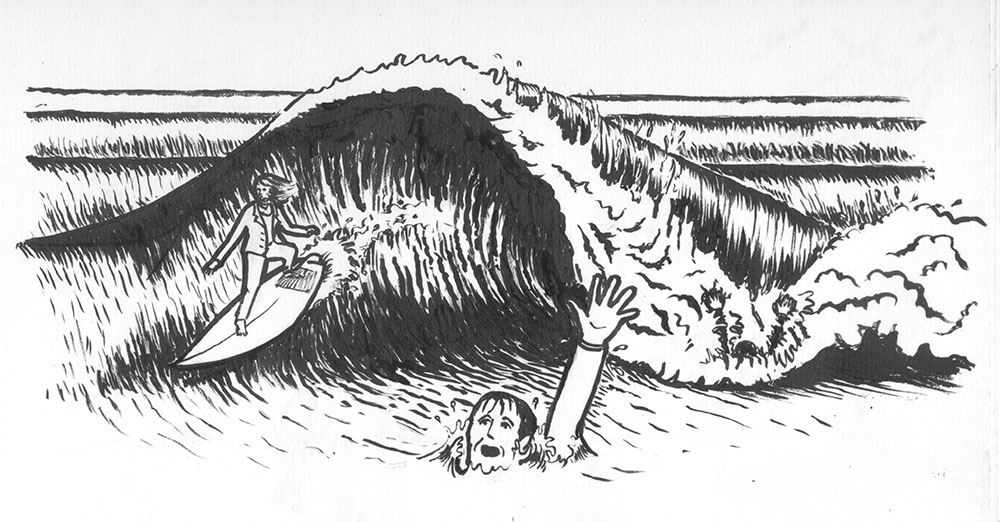 The illustration, redrawn carefully and then inked up using Indian ink and a watercolour brush

I then scanned the inked-up version into photoshop and cleaned it up, and then changed the black to sea green. I often use a cardboard base for my illustrations – it lends a nice texture and prevents the illustration becoming too “clean”. I have a pre-scanned piece I use all the time; I placed this into the background, changing the inked layer’s blending mode to “multiply” so as to hide the white.

I put a sky-blue gradient layer effect onto the cardboard layer, and then all that was required was to add detail colour to the scene using photoshop’s brush tools and a graphics tablet, making sure to highlight the surfer. 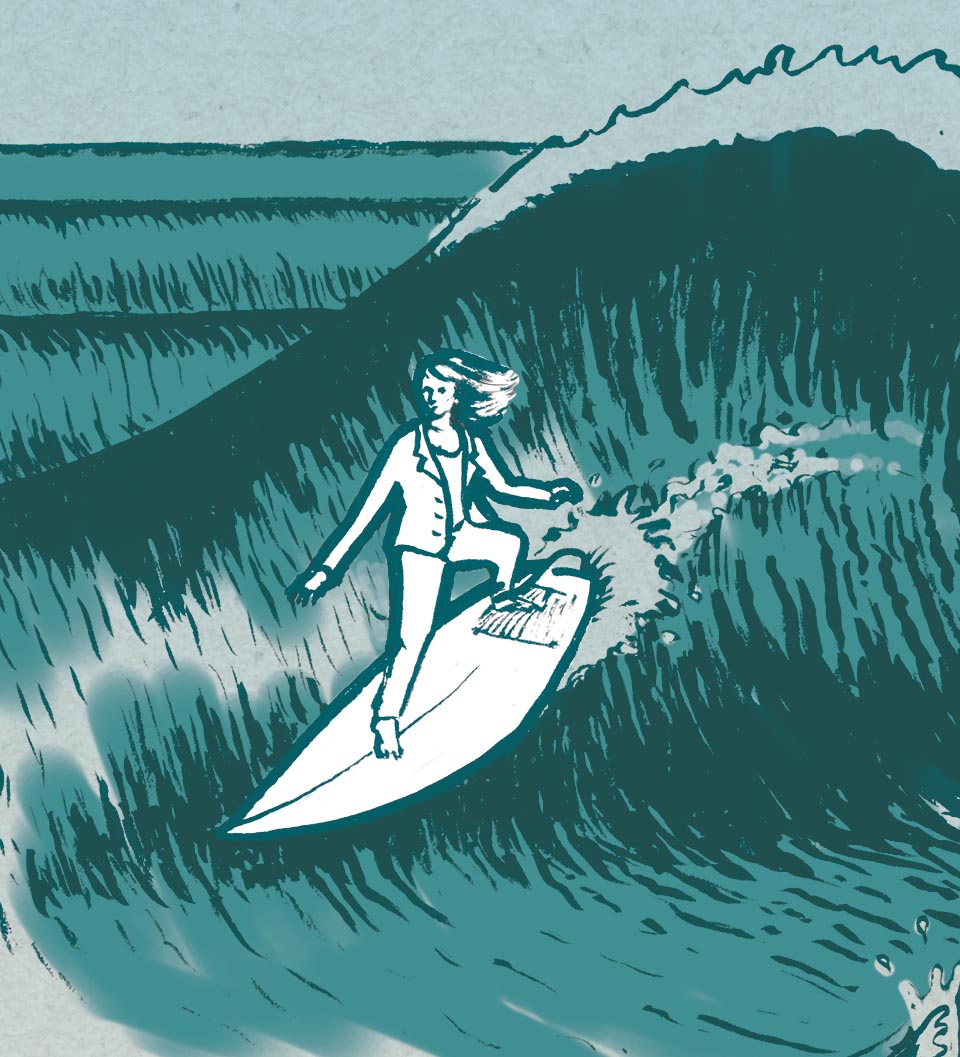 The final page design divides the page up into thirds. I usually work with the Rule of Thirds or the Golden Section because it makes creating powerful visual hierarchies so much easier. 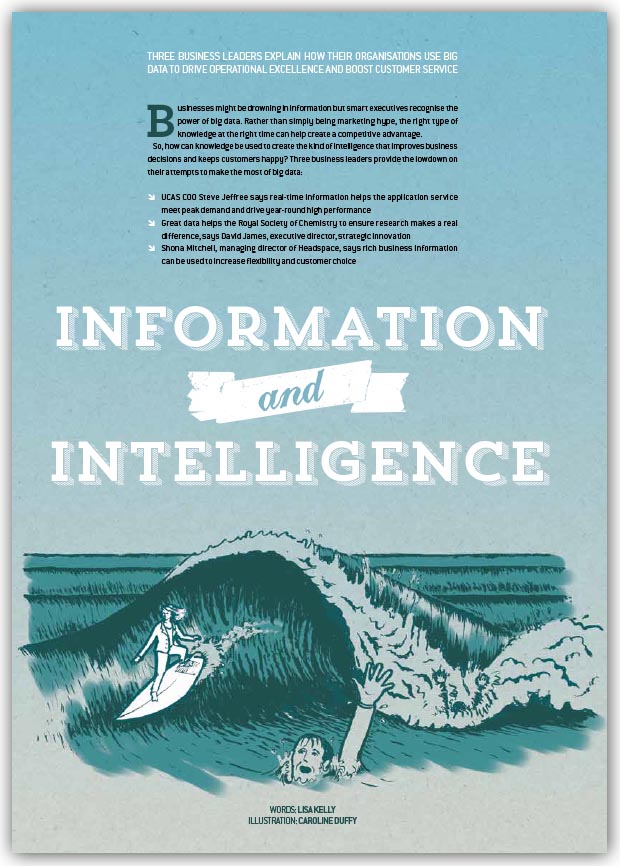 And there we have it! Hope you enjoyed this post 🙂 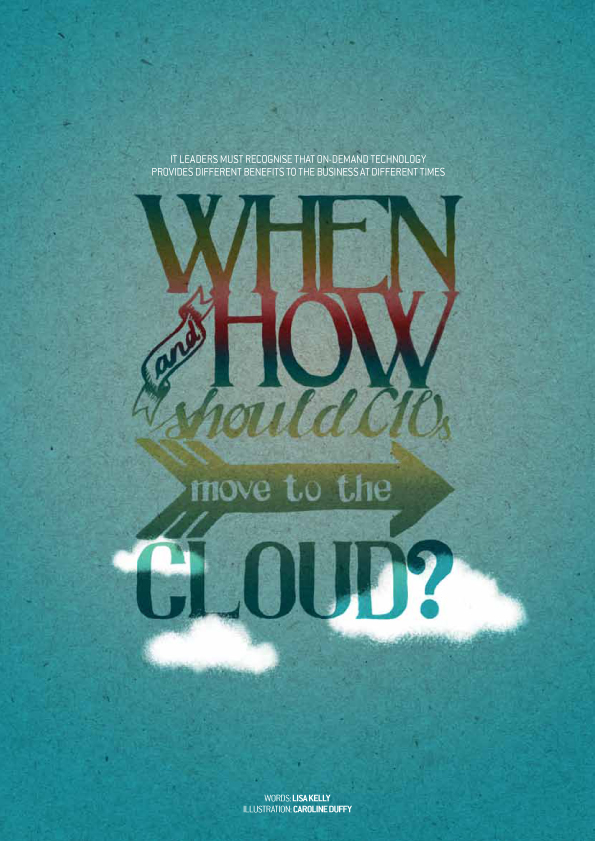 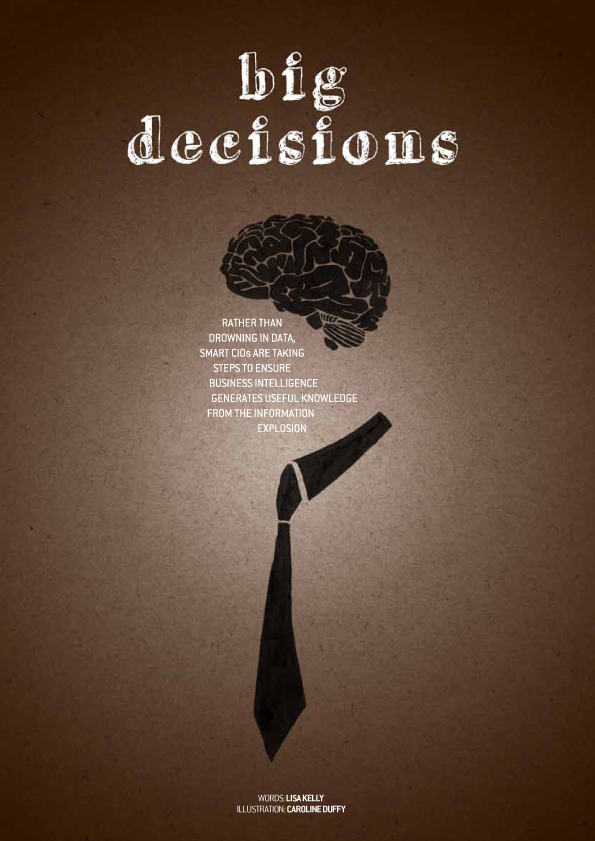 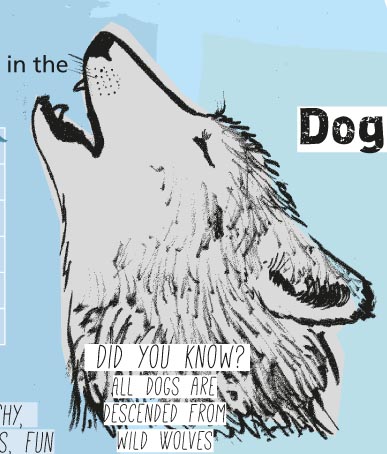 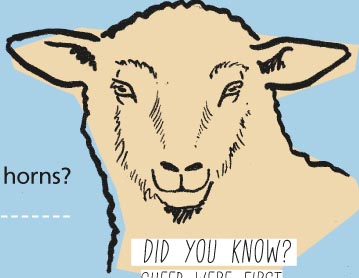 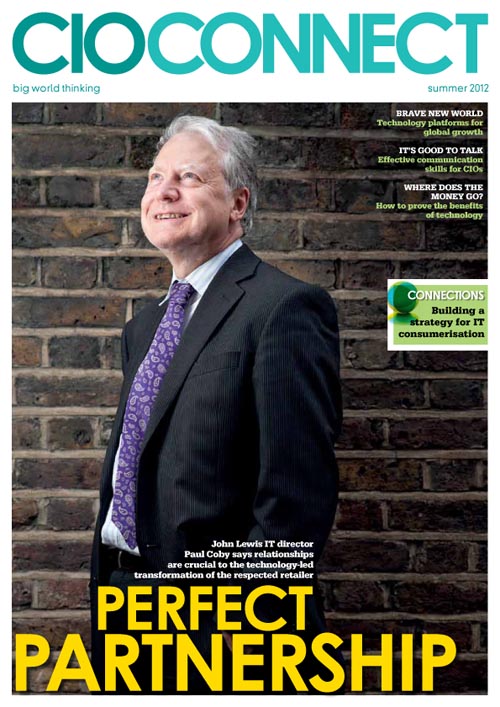 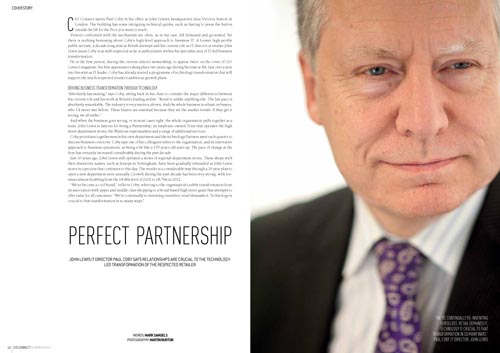 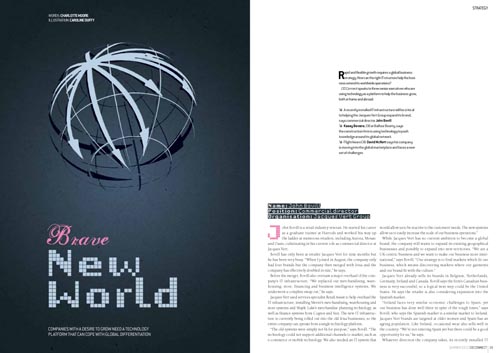 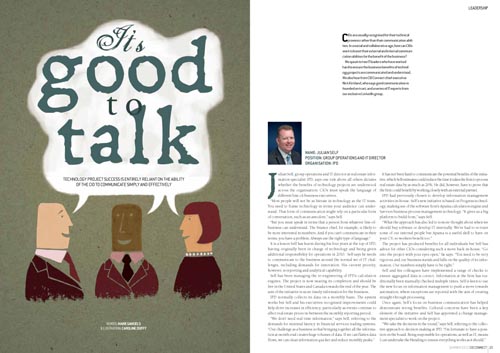 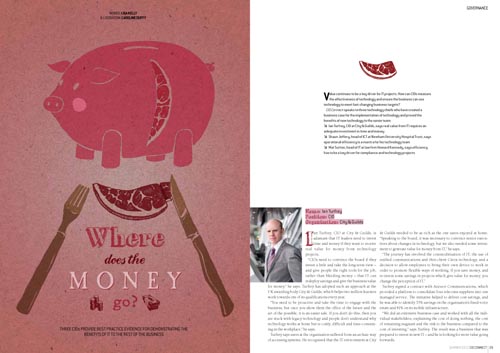 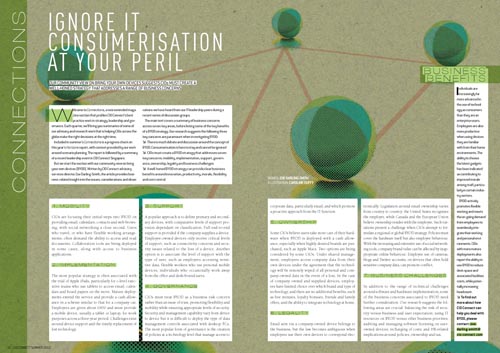 I’m always doing a big song-and-dance about CIO Connect magazine, for the simple reason that it’s a dream to work on. The editor is top class (I understand he was recently named as one of twitter’s top 100 journalists to follow – number 91, if you credit that sort of thing) they use a wonderful photographer and professional journalists, it’s beautifully-printed and the end product is always something I’m very proud to have been involved with.

But all that glitter and gloss costs money. What about the companies that don’t want to spend so much, but still desire a handsome regular publication to share with their members, customers, shareholders or what have you?

Never fear, it can be done. There’s a step up from the self-produced mediocrities begat by Microsoft Publisher, Comic Sans and clip-art. It’s possible to get a rather smart-looking result, using a skilled designer, cheap stock images and custom illustration. I design and illustrate such a publication. I’m not entirely sure if you’d call it a newsletter or a magazine. It’s a 16-page quarterly thingumy. The client supplies stories that their members have written along with thumbnail pics of the authors, an editor edits and collates, I illustrate a cover incorporating the arrow of the client’s logo and a reflection of the subject matters covered or the season we’re in. This season being Spring (and as I type, the sky is obediently blue, the daffodils obediently flashing upon that inward eye which is the bliss of solitude, and the sparrows obediently chirpy), I done made a nest of arrows and what-not. I have a thing about cardboard backgrounds (have you noticed? You have?) as they lend texture and earthiness to vector-based illustrations which can often be toe-curlingly clean and false. Here’s the cover (click on the image for a bigger version if you like): 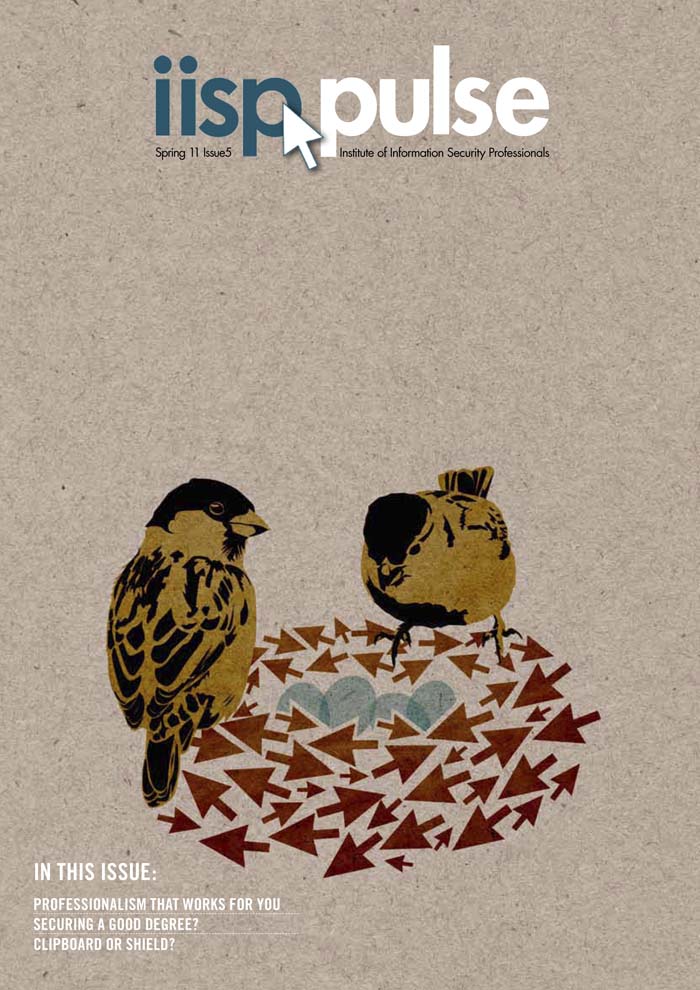 The illustration avoids us having to source what could be a very expensive cover photograph, plus it helps give style and character to the thingumy. Inside, I’ve kept everything very clean and clear, devising a layout which is quick and simple for me to lay out, thus saving money: 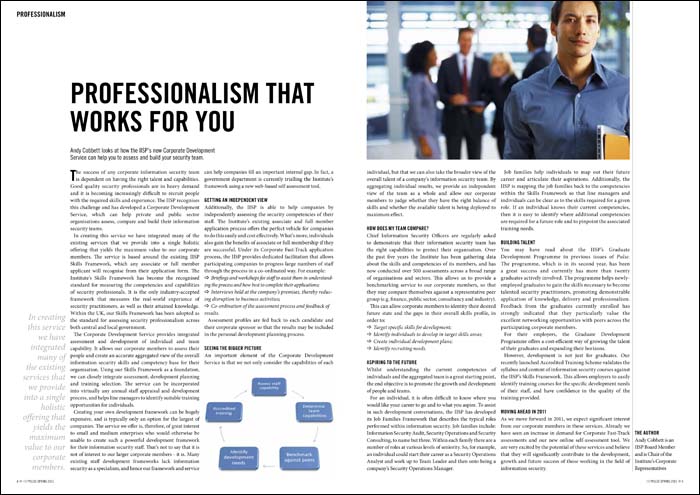 Stock imagery is often difficult to use without it being a touch cheesy. I try to circumvent this by the use of interesting cropping and wrapping text around. Where possible I don’t choose the obvious image, but of course I am limited to what the image libraries can supply. Keeping everything clean and aligned to a grid adds needed class. 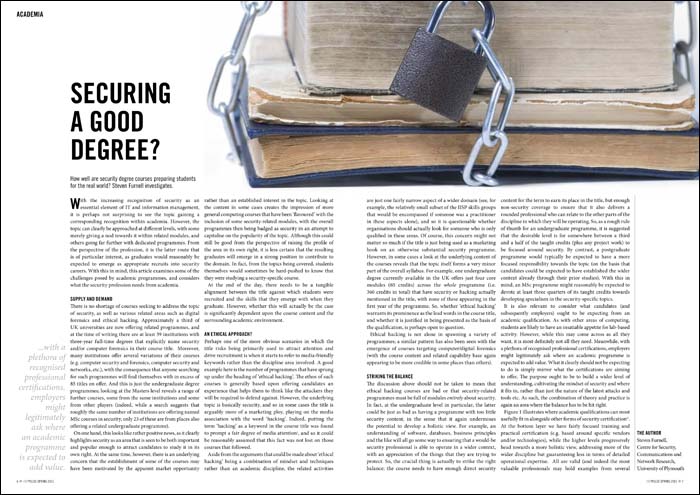 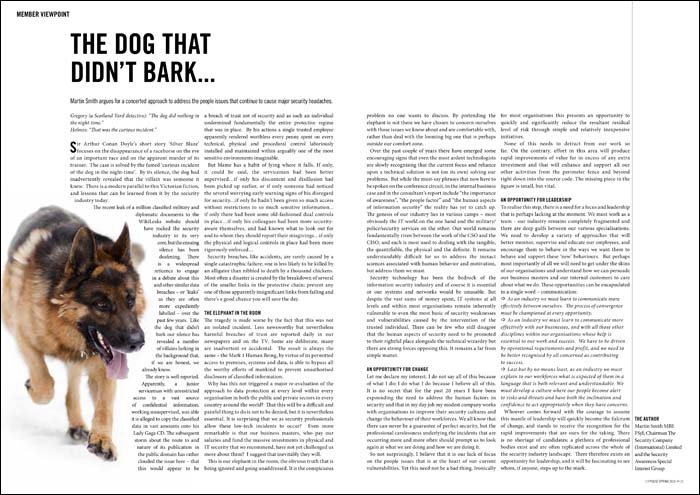 So, there’s a middle ground. It’s possible to get interesting professional magazine design on a budget. It’s a line of work that can be really enjoyable, too. I think what makes Pulse a success is that I’m pretty much left to get on with it – and I find that when clients have that level of trust, designers can really step up to the mark.